From the Archives: MicroLyte Vet on Pantarsal Arthrodesis 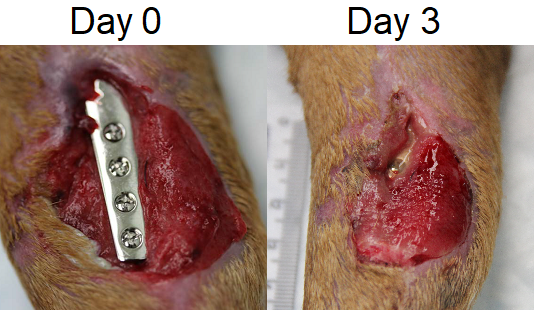 A 2-year-old female bulldog presented with a comminuted open fracture after being
hit by a car. The fracture was repaired by a pantarsal arthrodesis. Significant surgical
wound infection and dehiscence with some tissue necrosis occurred after surgery.

The infected wound was treated over a period of five weeks. Treatments included:

These treatments were ineffective, and the wound showed no progression to closure with the bone plate remaining exposed. The wound cultured positive for MRSA.

MicroLyte Vet was applied to the wound and over the bone plate daily for 5 days and then every other day for a week.

After that time, MicroLyte Vet was reapplied during periodic bandage changes. Within one day of the first application, the granulation tissue began to advance over the bone plate. By Day 3, the soft tissue had almost completely covered the bone plate. The final follow-up was on Day 13, where the wound showed healthy granulation tissue and a significant reduction in wound size.