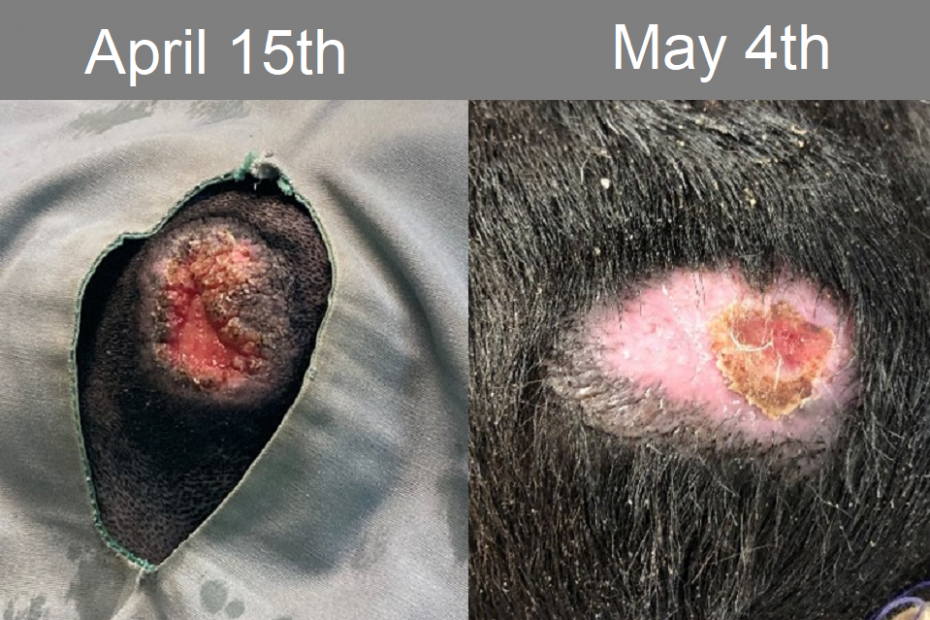 On the 27th of April, Zags was adopted out. His wounds were completely healed by the end of May, after a few follow-up appointments.

On April 9th, cultures were submitted and debridement/scrubbing with chlorhexidine was conducted. Entederm was applied and the wound was covered. The laboratory results revealed the following isolates:

Vitals were thin, primary concern a cough – believed to be kennel cough. The patient was started on Doxycycline 10mg/kg PO q 24 for 10 days.

Surgery to repair the decubital pressure sore was conducted:

Ulcer was debrided with #15 blade down to fresh, clean, bleeding tissue. The wound was flushed with sterile saline. MicroLyte Vet antimicrobial film applied to wound. Wet-to-dry bandage placed on top of wound and covered with a lap sponge and held on with a tie-over bandage. Stay sutures placed with 0 monosorb and umbilical taped used to secure the bandage.

Six days after the initial treatment with MicroLyte Vet, the patient was sedated for a bandage change.

Sedated exams to change the bandage and re-apply MicroLyte Vet:

Throughout the month of May, Zags was treated by his new owners, who were instructed to administer Enrofloxacin for a week and Proviable until the supply was gone. On June 3rd, we received the following photo from the new owners:

Zags is completely healed by June 3rd – and in a new home!

Another happy ending, thanks to great veterinary care that included MicroLyte Vet!

How you can help

Donate to SPCA of Northern Nevada