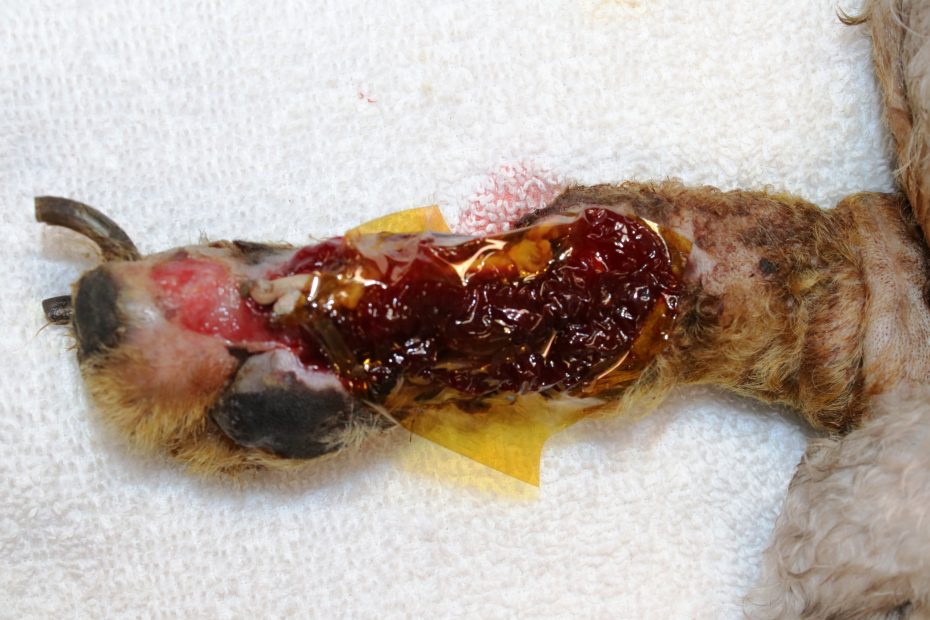 “I have a case of a dog with a severe necrotic injury to the foot after being strangulated by a huge matt of hair.  We cleaned up the foot, but it was mostly necrotic tissue underneath.” Dr. Gotthelf wrote in an email explaining the case. In a follow up, he continued:

“When we saw how matted to the skin he was on all 4 paws, we sedated him and shaved off the matted hair.  When we got to the right front foot, as we were shaving, necrotic tissue was exposed along with the underlying bone and tendons. The wound had a foul odor and was very painful.  We debrided some of the necrotic tissue away and we got some bleeding in the tissues, so we decided to try and save the foot by allowing it to granulate.  Initial treatment included a 5 minute soak in povidone iodine, towel drying, followed by the application of MicroLyte Vet covered by gauze and tape. Cephalexin was started and used for the first 2 weeks.  The would was treated every 3 or 4 days under sedation as previously described.  Photos were taken at almost every visit to document the progress.  During one visit, a piece of unattached bone was removed before re-treatment.  Over 6 weeks of treatment the wound healed beautifully.  After 3 months, all that remained was a linear streak of scar tissue and Kilo was walking almost normally on the foot.”

“I did not think that we could save the foot. I did the procedure of debriding and soaking the foot in disinfectant iodine. Then we dried it and applied the MicroLyte Vet to it under the bandage. The bandage was changed every 3-4 days using MicroLyte Vet each time.”

See how the wound progressed over the six-week treatment with MicroLyte VET:

On October 10th, only 13 weeks after the initial treatment, Dr. Gotthelf reported the wound had completely healed.

No infection was observed throughout the treatment.